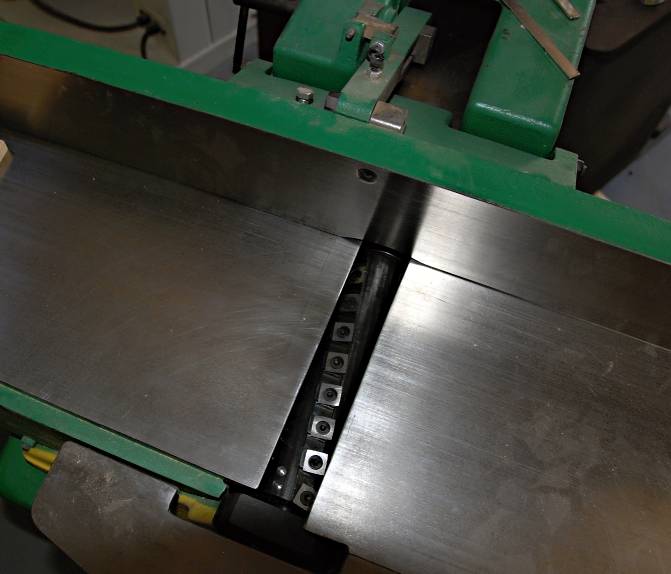 Spiral cutter heads for jointers and planers have been gaining popularity over the past several years. These heads utilize a large number of carbide inserts rather than the typical two or three high-speed steel knives found in traditional cutter heads. In addition to the greater durability of carbide compared to HSS, each insert has four usable edges, so if you nick one, rather than having to resharpen a whole knife, you just rotate that one insert (or eventually replace it.) No more trips to the sharpening shop, an important consideration when it’s 2+ hours away. Below are the steps required to replace the head in my 8″ Woodtek jointer. This is a pretty generic Chinese import beneath the green paint, so the method probably applies to a wide range of import models. Byrd Engineering, the maker of Shelix heads, offers an 8″ head for these generic Chinese jointers. The main issue is whether you need the metric variant or not. The Woodtek does use the metric version.

First step is to unplug the machine. (You presumably knew that.) The inserts on the cutter are extremely sharp, so you will want to wrap the head with masking tape to protect your fingers when you’re handling it.

Now that the preliminaries are done, remove the fence, the bracket for the fence, and lower the infeed and outfeed tables as far as they go. Remove the belts from the pulley and the pulley from the shaft. Take care not to lose the square key that locks the pulley to the shaft.

The bearing blocks are held in with nuts that are underneath the body of the jointer. On my machine they required a 14mm wrench.

Once you’ve removed the two nuts, you can lift the head and the bearing blocks. You now have to remove the bearings from the shaft. This may be difficult without the right tools. I happen to have a 20 ton arbor press, which made pretty short work of the job. I hung the bearing block on two pieces of angle iron laid across the press and pressed out the shaft, taking care not to drive it so far that the head dropped on the floor. A gear puller is an inexpensive alternative if you don’t have access to a press. If you don’t want to deal with this step, you can buy new bearings when you buy the Shelix head. Compared to the price of the head, they’re pocket change.

With the bearing blocks removed, it’s now just a process of reversing all the steps, starting with pressing the bearings onto the new head.

Now place the assembly in the jointer body, reattach the pulley, the fence bracket and fence, and raise the tables back to their normal positions. There’s no shortage of guides on the web about aligning the outfeed table to the cutters and the infeed to the outfeed.

One thought on “Installing a Shelix Jointer Head”

This site uses Akismet to reduce spam. Learn how your comment data is processed.