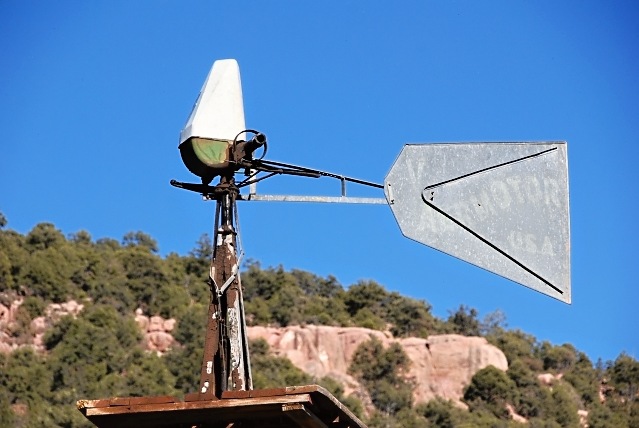 What’s wrong with this picture? Yes, the blades of the windmill are missing. The fan assembly came off about three weeks ago, apparently due to a failed cotter pin. We’ve been trying to get it fixed but the well service firm that erected the windmill has decided they don’t want to work with us anymore (in spite of the fact that we have of course paid every bill promptly and in full, no haggling, no delays.)

The fan is 10′ in diameter and weighs about 75 pounds. Together this means it’s no easy feat to get it up the tower and installed. My first couple of attempts to reach tech support at Aermotor, the firm that made the windmill, were futile. Some of the sales guys gave me information on the required cotter pin but didn’t say anything about what it would take to restore it to it’s proper place.

Thinking it was just a matter of getting the fan up the tower and sliding the shaft in place, I worked out a way to rig an upright, a boom, and a pulley system. We bought a 24′ extension ladder, which gets me up to the platform. I pulled a length of 2.5″ water pipe into a vertical position and anchored it to the platform on the tower.

Not visible in the picture is the boom which slides into the upright pipe and provides a 4′ arm to support a pulley. I got this all done before lunch today. I came back to the house for a lunch break, which is when I finally got hold of someone at tech support. He explained it wasn’t just a matter of slipping the shaft back into the gearbox and reinstalling the cotter pin. Apparently some other gears are in the way and have to be disassembled first. He was pretty emphatic that there was no safe way to do this with the windmill on the tower.

After lunch our friend Ramey gave me the name of a well-service firm in Española. I called immediately and got a friendly voice on the other end. He’s backed up about two weeks, but seems to be very happy to do the work. To top it off, he’s familiar with Aermotor windmills, so he knows what he’s doing. With a little luck I’ll have another post in 2-3 weeks with a repaired windmill to show.

This site uses Akismet to reduce spam. Learn how your comment data is processed.