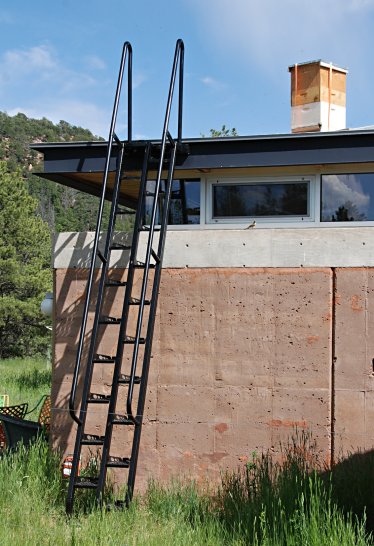 Two years ago our friend Ramey Douglas asked if he could set up a bee hive at our place. He’s raising bees primarily to help fight the die-off, but harvesting honey is a benefit not to be ignored. The first year we put the hive south of the bedroom. This required strong fencing to keep bears away. A variety of measures were attempted to keep ants out of the hive. The ants won. Last year we decided to put the hive on the roof of the main house. This worked well in terms of keeping the hive save, but required an extension ladder to access the roof in order to check on the bees and to provide sugar water when there weren’t enough flowers to feed on.

This year we installed a permanent stair to the roof. Our initial thought was a spiral staircase, but that would be awkward if carrying anything (like the hive box which has to be taken down for winter). We ended up purchasing a steel “alternating tread staircase” which is similar to a ship’s ladder. Installation is more involved than just leaning it against the house, of course. A bracket had to be made to attach to the perimeter I-beam on the roof to provide a flush surface to bolt the ladder. A concrete block had to be cast with anchor bolts for the base of the ladder. Relative locations were quite critical – the holes for the bolts provided only about 1/8″ of leeway. Adding to the challenge is that there were no level surfaces against which to measure. A plumb transferred the locations of the bolts to blocks that were the correct vertical distance from the bolts. A spirit level established the height of the concrete block, and a steel tape measured the distance from the plane of the bolts. Measurement of diagonals established right angles.

The ladder, of course, did not come in the color we wanted. It was safety yellow; we wanted black. We finally had a couple of mornings that were warm enough and calm enough to spray the ladder using an LVLP sprayer.

The catalog listed the weight of the ladder as 334 pounds, which was cause for concern about moving it and setting it up. Turns out it doesn’t weigh that much, especially before the railings are installed. With the help of Ramey and John Rohr, we were able to carry the ladder to the location, set the base at the bolts, and walk the ladder upright. Much to my amazement and pleasure, the bolts slipped right through the holes at the top of the ladder.