Spiral cutter heads for jointers and planers have been gaining popularity over the past several years. These heads utilize a large number of carbide inserts rather than the typical two or three high-speed steel knives found in traditional cutter heads. In addition to the greater durability of carbide compared to HSS, each insert has four usable edges, so if you nick one, rather than having to resharpen a whole knife, you just rotate that one insert (or eventually replace it.) No more trips to the sharpening shop, an important consideration when it’s 2+ hours away. Below are the steps required to replace the head in my 8″ Woodtek jointer. This is a pretty generic Chinese import beneath the green paint, so the method probably applies to a wide range of import models. Byrd Engineering, the maker of Shelix heads, offers an 8″ head for these generic Chinese jointers. The main issue is whether you need the metric variant or not. The Woodtek does use the metric version.

First step is to unplug the machine. (You presumably knew that.) The inserts on the cutter are extremely sharp, so you will want to wrap the head with masking tape to protect your fingers when you’re handling it.

Now that the preliminaries are done, remove the fence, the bracket for the fence, and lower the infeed and outfeed tables as far as they go. Remove the belts from the pulley and the pulley from the shaft. Take care not to lose the square key that locks the pulley to the shaft.

The bearing blocks are held in with nuts that are underneath the body of the jointer. On my machine they required a 14mm wrench.

Once you’ve removed the two nuts, you can lift the head and the bearing blocks. You now have to remove the bearings from the shaft. This may be difficult without the right tools. I happen to have a 20 ton arbor press, which made pretty short work of the job. I hung the bearing block on two pieces of angle iron laid across the press and pressed out the shaft, taking care not to drive it so far that the head dropped on the floor. A gear puller is an inexpensive alternative if you don’t have access to a press. If you don’t want to deal with this step, you can buy new bearings when you buy the Shelix head. Compared to the price of the head, they’re pocket change.

With the bearing blocks removed, it’s now just a process of reversing all the steps, starting with pressing the bearings onto the new head.

Now place the assembly in the jointer body, reattach the pulley, the fence bracket and fence, and raise the tables back to their normal positions. There’s no shortage of guides on the web about aligning the outfeed table to the cutters and the infeed to the outfeed. 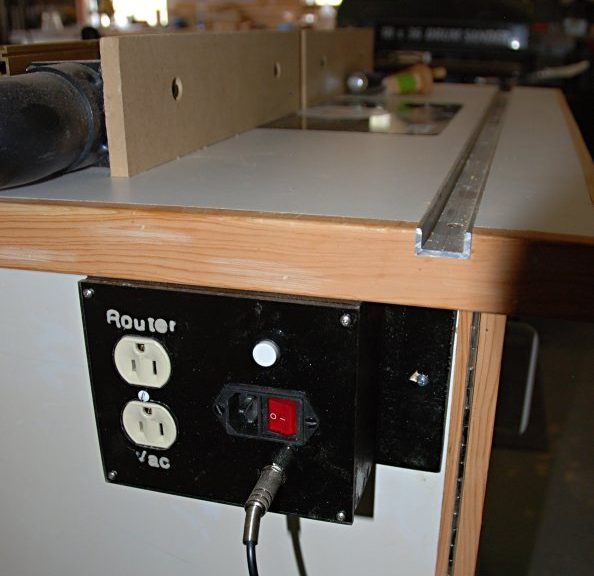 Safety consciousness in the shop is of paramount importance – a moment’s inattention can cause lifelong damage, especially to your hands. In extreme cases, people die from shop accidents. I don’t think I know anyone who pays more attention to safety than my friend and fellow woodworker Derek Roff. Hands-free switching of the router in a router table means you never have to let go of the workpiece. A footswitch solves this problem, but introduces a new hazard; you could accidentally step on the switch and spin up the router. Several years ago Derek built an interlock using high voltage AC relays that solves this problem. In order to start the router you need to step on the footswitch and press a momentary pushbutton. The router stays on as long as the footswitch is depressed. Inspired by this device, I’ve designed a next generation interlock that takes advantage of cheap microcontrollers and low-cost relays to add features to the interlock while lowering the cost.

The more important addition is a delayed start mode. If you first step on the footswitch, then double-click the start button, the router will start five seconds after the double-click. This gives you time to get both hands on the workpiece before the router spins up.

It is quite common to have some sort of dust collection, often a shop vac, attached to your router table. The interlock provides a second receptacle for powering your shop vac. In order to reduce the likelihood of popping a breaker, the interlock provides a 3 second delay before starting the vac. The vac stays on 3 seconds after the router stops (when you release the footswitch) to catch a few more chips.

The device provides separate jumper-selectable soft-start for the router and the shop vac, mainly to reduce the starting surge load on your breakers. When the soft-start is enabled, the router and/or shop vac are spun up to speed over a 2 second span. Because of how soft-start is implemented it will not work correctly with routers that have built-in soft-start. It also might not work correctly with variable speed routers, like the Porter Cable 7518 that I have in my router table. Soft-start is important on hand-held routers, but less so on table-mounted routers, so the loss of the ability is not a big deal.

The heart of the device is a custom printed circuit board (PCB) that I designed using KiCAD, a free, open-source electronic CAD program. The boards were fabricated by JLBPCB in China. The smarts are provided by an Arduino Nano, which was selected for its low price (<$2) and ease of use. The finished product, mounted on my router table, is at the top of the post. Here are the guts:

And here it is mounted in a box:

The front panel is 1/4″ acrylic, cut on my CNC router. The lettering is cut on the back while the cover paper is still on the acrylic. The routed lettering is sprayed with white paint. After the paint dries the paper is peeled off the back and the entire back (inside) is sprayed black.

It is beyond the scope of this blog to teach you how to build this. If you already know Arduino programming (or at least how to “burn” an Arduino) and can solder a fairly simple PCB, the files below contain the KiCAD schematic and board layout, the bill of materials, and the Arduino code.

Tip of the hat to David Strafford for tirelessly answering all my questions about the electronics I don’t understand.